1. OBAMA.  The future must not belong to those who criticize the prophet!

2. Blatant lie being told and propogated by Colleges and the media: "Hate Speech in not covered by the Frst Amendment."

3. Obam/General Casey  It is a greater tragedy to threaten the Diveristy of Islam than to kill American Soldiers.

4. Propogating the Lies that:

B. Islam is a relgion

C. Islam is a relgion of Peace

D. Muslims do not blaspheme Jesus but honor him as a

E. Allah desires love and peace between all religions

F. God and Allah are the same.

5. United States Senate and House resolutions written by Muslims condmening the Constitutional right to express all your love as well as all your hate.

6. Islam being promoted above all other religions in time studying and depth of content and forced participation in public schools across America.
​ 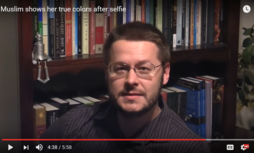 Girl's lies and ignores her love for Hitler and hatred of Jews.