“I think it is unseemly that the president would attack journalists for doing their jobs, and encourage such anger at the media,” said Dean Baquet, the executive editor of The New York Times." https://www.nytimes.com/2017/07/02/business/media/trump-wrestling-video-cnn-twitter.html

HA!!! At least Trump knows how to have fun winning!!! Plus,Trump's harmeless fun isn't actually ENCOURAGING or INCITING our anger at the media.  RATHER, President Trump continues to SPEAK OUT FOR America, GIVING VOICE TO the anger of the people at the constant liars and haters masquarading as legitament news organizations.  He is, thank God,  lifting up our purposely muted and ignored anger at the psychotic, American hating media liars.

“I think it is unseemly that the president would attack journalists for doing their jobs, and encourage such anger at the media,” said Dean Baquet, the executive editor of The New York Times."  WRONG PERSPECTIVE, MR. HYPOCRITCAL BAQUET. It is 1000 times more unseemly that pathologically lying, deceptive, hypocritical, and destructive media outlets, like your demonic NY Times, CNN, and the Daily News, even exist to destroy people's lives with impunity. Not only are you hell bent on destroying the lives of conservative Christians and their beliefs and values while lying for and extolling and covering up the perversions of Medina/Part II Islam, your paper and the others also lied for and defended de Blasio's fake, racially inflammatory race war in the Eric Garner case.

All three so called "news organizations," and others around the country like the Atlanta Journal, LA Times, Chicago Tribune, etc., absolutely refused to ever question race baiter and assassin-encourager de Blasio about Kizzy Adonis in his unnecessary racist rant-lies to his own son. It was his lying, dishonest and disgustingly sweet rant that got two police officers killed.

And they all defend their murderous stupidity with impunity. 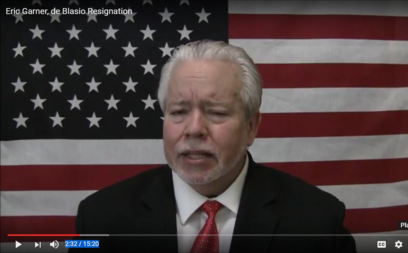